The CasinoFootball team have compiled a useful list of all of the current EFL Championship football players for the 2019 – 2020 season.

There are twenty four teams in the English Championship League, with over six hundred and seventy professional players. The most expensive player is Aleksandar Mitrovic who is worth twenty two and a half million pounds. The second tier of English football hosts approx 49.5% of foreign players, approx 330 of them are from overseas.

The league hosts forty six games in total, starting in August 2019 and ending in May 2020. The players to watch this year are Pablo Hernandez of Leeds United and Tom Lawrence of Derby County. Both of these players are exceptionally talented and are sure to score double figure goals this year for there respective clubs. Other players such as Lucas Joao, Ashley Fletcher and Karlan Grant are also ones to look out for.

The youngest active Championship player is Michael Olise who plays for Reading Football Club and is just 17 years and 7 months old. Derby county have two of the youngest players in there squad with Jason Knight and Jayden Bogle who are both under 20. The oldest active player this season is Angel Rangel of Queens Park Rangers, who is 36 years old and 9 months. Michael Dawson of Nottingham Forest, is the second oldest player, at 35 years and 8 months.

Take a look at one of our football themed slot games below, packed with all the thrills and spills of a football game. 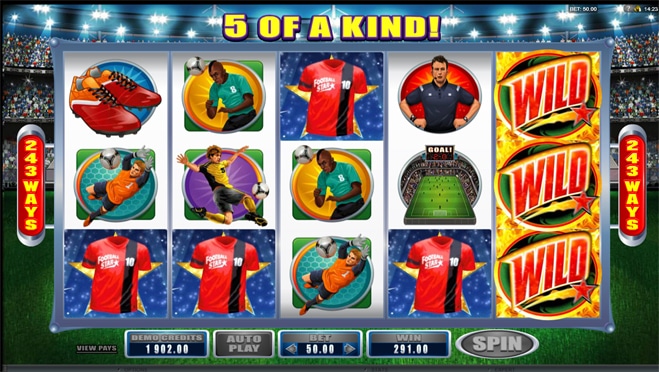 We do host other Football games at Casino Football, classics such as The Champions and other sporty themed slot games too.

Why not take a look at some of our other games such as the famous Casino Football Mobile Roulette game.

We will be updating this player profile page for the EFL Championship teams on a regular basis. At the time of writing, all of the above are as accurate as can be. Dated 14th August 2.20pm 2019.

Don’t forget to check out our new games, such as the Winstar slot game Or read up more about the Arrival of Football post.