Foxin Wins is a five reel slot machine game with Extra’s! This game has been created by NextGen Games and has been designed exceptionally well.

There are twenty five lines of winning options as well as the SuperBet™ and random bonus feature. The SuperBet™ feature increases the game play options and adds more pay lines. This feature can be controlled on the Right hand side of the reels with three options. If you land the scatter pot symbols you uncover free spins, which in some cases are doubled in prize value too. (10 Free Spins are activated)

The cute fox character makes this game stand out from similar games on 5 Reels. In fact this is by far one of the most popular slots of 2019 at Mobile Casino Football. The usual mobile slot game options are also available with this game such as sounds, wilds, scatters and playing card icons. What’s more the game has been upgraded with a Christmas Edition this year, making it as festive as it can be!

The wager amounts can be controlled from 25 pence to £50 per reel spin. We do urge all customers to only ever bet what they can afford with all of our slot games.

So if you love Foxes and love slot games then Foxin Wins is the game for you to play! 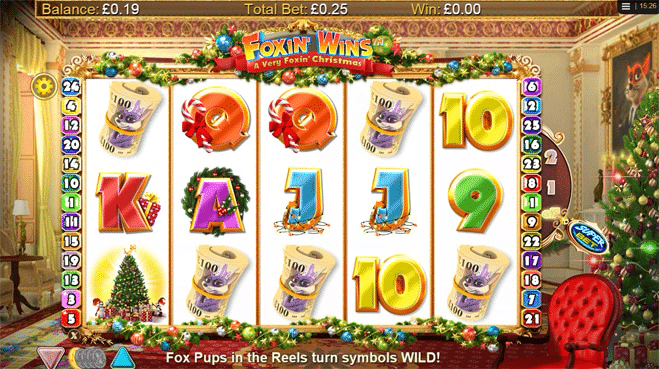