How to Play Video Poker

Five card stud was once the most popular form of poker, but is now rarely played as a game, having been upstaged by Texas Hold Em and Omaha. However, although virtually extinct at the poker table, five card draw poker is enjoying a renaissance in the form of video poker.

Land-based and online casinos average about 60% of their take from slot machines, and in some casinos up to two-thirds of those machines are now video poker games. Video poker is one of very few games that were developed for casino use before being played privately.

As in live draw poker, in video poker you are initially dealt five cards from a randomly shuffled deck. Most video poker machines will indicate if you have a made paying hand, but you don’t have to hold that hand. You select which cards to hold, then press the Draw button, and new cards are dealt off the top of the video poker deck to replace those you chucked. If the final hand is in the payout schedule, the video poker machine makes the payout, either by counting up credits or dropping coins; otherwise, your bet is lost.

To the skilled player, the attraction is that some video poker games offer an opportunity for a long term profit. Just as in a live poker game, there is a considerable amount of risk and luck involved in the short term with video poker, but it is a player’s skill that will make the difference between a winner and a loser in the long run.

You may already know that some video poker games offer over 100% potential long term payback, but you will achieve a video poker game’s rated payback only if you always hold the cards that will give the highest expected value (the average payback for all possible outcomes) for each video poker hand you are dealt. Why not try out some of our slot machine games from Da Vinci Diamonds, Starburst and Blackjack.

A video poker machine resembles the traditional slot machine in several ways, most having a coin slot to accept your bet and a coin hopper that pays out your winnings. They also make various sounds to attract players.

The most obvious difference is that on a reel slot the player wins when the symbols stop with a particular combination, such as three bars, while a video poker player wins when the final five cards form a recognizable poker hand, such as a straight. The most important difference, however, is that the video poker player has an opportunity to select which cards to hold and then draw in an attempt to improve the hand. A certain degree of skill is required in this selection process to achieve the video poker game’s rated payback.

The reels on all modern slot machines are spun by independent motors to display an outcome that has already been determined by a random number generator.

Many casinos advertise 97% or better payback on reel slots, but this often applies only to certain slot machines. Can you guess what the payback is on the others? Without knowing the slot machine’s internal logic it’s impossible to calculate, but if 97% payback is considered generous then what do the others pay? Hmmm? Many online casinos state their slot machines are programmed to Atlantic City rules. These gaming regulations specify only that a machine must pay back at least 75% of all money wagered.

Compare the very best reel slot machine’s maximum of perhaps 99% payback to a minimum of 99% payback with optimum strategy on any of the recommended video poker games. But that’s just the beginning. On many video poker machines you really can achieve over 100% long term payback.

But don’t get the idea that careful selection of games and accurate play are only for long term players. Sure, it’s possible to be a winner on a low paying video poker game. A small percentage of players win big every day at craps, roulette and slot machines. The casinos publicize this to attract more players, who don’t all win. They’re the blokes with that big “L” for “Loser” on their foreheads.

While it’s true that luck predominates in any short playing session, it’s skill that makes the difference between a winner and a loser in the long run. That same skill also increases your chances of being a winner in each video poker playing session, no matter how much or how little you play.

As in live table poker, the video poker cards are dealt from a standard 52 card deck (53 in Joker’s Wild games) that is well shuffled before each video poker hand. After being dealt your initial five cards, you must decide which cards to hold and which to discard in an attempt to get a winning poker hand (or to improve an existing winner) just as you would do in a live draw poker game. But there the similarity ends.

So just how is video poker different? Well, it’s like this:

In video poker the machine is not trying to beat your hand, so attempting to bluff or to “read” your opponent is pointless since there are no opponents.

You can’t get a “bad beat” in video poker. Your straight can’t lose to that flush on another player’s machine. It will always win according to the video poker payout schedule.

Some plays that may sometimes be correct in table poker are wrong in video poker. One of the most common errors is holding a “kicker” or other worthless cards.

Conversely, many plays that are correct in video poker would be wrong in live table poker. In some cases, for example, it’s correct to draw to an inside straight.

It’s these video poker characteristics that lure most players into making bad plays, thus making video poker a big winner for the casino, even on games that offer over 100% potential payback. In this video poker clinic, however, I’m gonna teach you just how easy it is to keep the video poker house edge to a minimum, and in some cases to even end up a winner.

An accurate video poker playing strategy is important wherever you play. Following an optimum video poker strategy will minimize your losses and give you the best chance of having a winning session. Don’t be taken in by claims of how to beat the slots or any other negative expectation game. Each video poker game has an inherent maximum payback that can be closely approached but never exceeded.

What is Expected Value?

The expected value of any chance event is the weighted average of all possible outcomes. Let’s see how to determine the EV of a video poker play.

There are thirty-two possible ways to play any dealt five-card video poker hand. You can hold all five cards (that’s one way), hold four cards and draw one (obviously there are five possible one-card discards), hold two cards and draw three (there are ten possible combinations for a two-card discard), hold three cards and draw two (again ten possibilities), hold one card and draw four (there are five ways to hold just one card), or discard all five cards. In any case, we have seen five of the 52 cards in the video poker deck, so the draw must come from the remaining 47 unseen cards.

For each of these thirty-two ways of playing a video poker hand there are many possible outcomes. Suppose, for example, that the card ranks in a dealt hand are J-9-10-J-Q. Of course, they could be in any order. Here you have a pair of jacks, which in some games is a made payout, but that may not be the best way to play the hand. Is it better to hold 9-10-J-Q and draw for a straight? If the 9-10-J are all the same suit, is it better to drop the pair and go for the straight flush draw? And if the J-Q are suited, should we draw for a royal flush? I can’t answer those questions yet, because the best play is often different for different games.

Note that if we draw for the straight it’s also possible to catch a J or Q for a high pair, and if we go for the straight flush we could also end up with a high pair, three of a kind, a straight or a flush. And drawing three cards to the J-Q has many more possibilities. The probability of every possible outcome must be multiplied by its respective payout, and the sum of all these possible results is the EV of the play.

There are 28 other ways to play this hand, but for most games these four give the highest expected values. The actual EV’s, however, depend upon the particular game’s payout schedule, so the best way of playing the hand varies between games. To create a video poker playing strategy, we have to examine many such card combinations and determine the highest EV plays. This allows us to build a hand rank table which can be used as a video poker playing strategy. 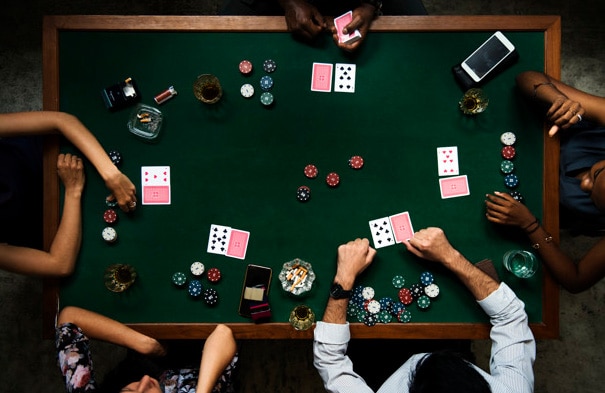 The first video poker game was simply called Draw Poker. The first payout was for two pair, resulting in only about 85% maximum payback, so it got very little extended play. In response, the manufacturer modified the video poker game to return the player’s bet on a pair of jacks or better. This accomplished two things: it turned a push (no exchange of money) into an apparent win, and it increased the maximum payback to about 99.5%. This combination resulted in the still-popular game now called Jacks or Better Video Poker, and thus began the video poker revolution.

Total video poker payback (all the contribs added together) = 0.9954

Key: payout is the per-coin payout. Five coins typically must be bet to qualify for the 4000 coin (800-for-1) jackpot on a royal flush. Probability is the chance of each final hand as determined by a game analysis computer program, assuming perfect video poker play. Contrib is the contribution to the total payback for each hand type, computed as its payout multiplied by its Probability. Each figure may be multiplied by 100 to convert to percent. For example, we see that over 25% of the game’s payback comes from two pair final hands, while slightly less than two percent comes from the royal flush.

The total of the Contribution column gives the video poker game’s maximum payback. In this case, it indicates that in the long run you can expect to average £0.9954 back for each quid played, or 99.54% payback. Since these calculations assume perfect play, you can typically expect one or two hundredths of one percent less with real human play. That begs the question of just how accurately one should endeavor to play. We could generate a video poker hand rank table that would enable perfect play, but that’s not practical for most of the attractive games, so we won’t bother with it for a sub-100% game.

Instead, here are the streamlined strategy rules for Jacks or Better video poker: (Always start at the top of this list of rules, and follow the first rule that applies to the dealt hand.)

In video poker only 21% of the dealt hands are winners, so you have to make the best out of the remaining 79%. Now lets have a look at the advanced video poker strategy, where the dealt cards give you several choices.