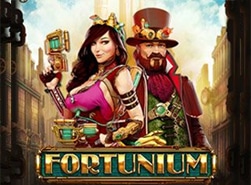 Explore the Fortunium slot game at Casino Football today on your mobile or pc.

This adorable new edition to the games portfolio looks and feels like something from another world. The layout of this game is pretty nifty, with unusual Reel symbols and some pretty whacky prizes too. The game is powered by Microgaming and has been brilliantly designed and developed by Stormcraft studios.

The game runs on 5 Reels and offers up to forty paylines across 5 rows. The wagering starts at ten pence and moves up to one hundred and twenty pounds as the maximum bet. The Fortunium game also sports a cool “Win Booster” option, which can be selected during gameplay. This feature increases the winning combinations within the game, which is a nice bonus to experience.

We were impressed with the graphics, such as the Clubs symbol, Diamonds, Spades as well as Plasma Guns and Airships. There are also two Character features, Victoria and Maximilian, they can cover the entire columns of the reels. If this occurs in sequence, then “Super Big Wins” can be experienced, we have added an example below:

There are other symbols such as Treasure Chests and the usual Wild symbol, that replaces reels to help wit Wins. It is reported that the Win Booster can allow a win of up to £100,000 which is staggering.

Extra Features within the Fortunium game

The game also has the Free Spins feature, this is capped at Ten Free Spins when five scatter symbols. The more scatter symbols appear, the more free spins you can win. These wins are multiplied by the total bet, excluding the win booster. The great thing is that the scatter icon pays in any position and are added to pay lines. Don’t forget to check out our other games from Gonzo’s Quest to the all new 88 Fortunes slot game.

This is a fantastic addition to our emporium of slot games, we sincerely hope you enjoy it! 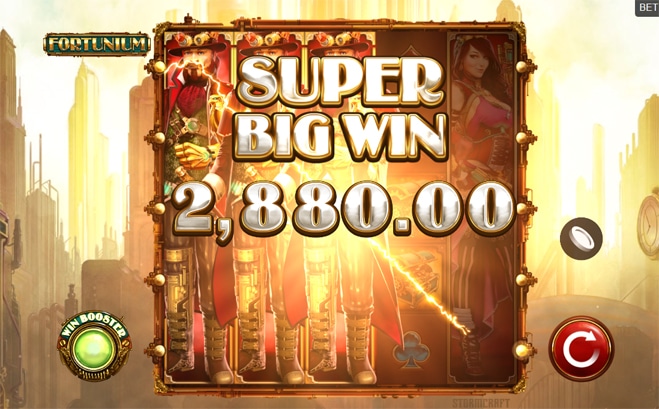