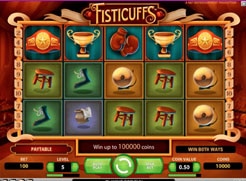 Experience the Fisticuffs slots game at Casino Football today! This boxing themed slot game takes players back to the early 1900’s with its rustic graphics and sounds. Net Entertainment are the developers of this fantastic game and boy is it impressive.

The boxing ring is very well presented with 5 reels and an impressive 10 paylines on offer. There are some cool features such as Diagonal Wilds, Straight Wilds and Win both ways. The game play is pretty simple to get used to and the game is very easy to operate. The traditional buttons are available within the Fisticuffs slots game, making it the perfect game for the novice and expert.
The graphics and sounds are ace, with an old traditional Piano playing in the background when the spins begin. The winning noise is awesome as crowds cheer you on and go mad when you win. The symbols on the reels look amazing, with boxing gloves, stool, boxing boots and a bell to name but a few.

The features offer something unique to the game play, with Stacked Wilds appearing as the most popular bonus feature. This feature appears when the Boxing Re-spin feature is active and works on reel one and or five.

The Diagonal Wilds feature appears on reels two and four and replaces all other character symbols. There are a few twists to this feature, this occurs when the Diagonal wild appears diagonally on an adjacent slot reel. Then the wild symbol will punch the wilds and then introduce the re-spin feature and substitute accordingly. The symbol is of an old fashioned boxer with a moustache and upset look, a real old school image.

The Win Both Ways feature allows matching reels from the left and also from the right. Traditionally slot reels only win from the left side of the reels, not however with Fisticuffs slots!

The top awarding matching symbols is the Golden Champions Belt, another great themed addition to this brilliant game.

If you are looking for some old fashioned fun, with a boxing theme, then the Fisticuffs slots game is definitely one to try out.

Go on, sign up today and enjoy yourself at Casino Football, the home of slots.

Check out some of our other great slot games such as Da Vinci Diamonds, Jingle Spin and many other mobile slot games. 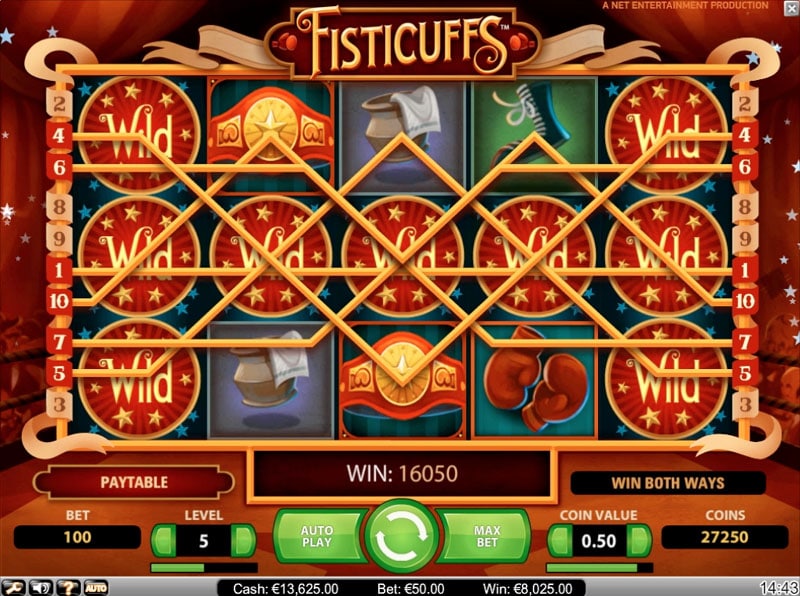